George Osborne: “The Parliamentary Review circulates 500,000 copies – that is more than The Financial Times, The Telegraph and The Guardian.”

George Osborne, the former chancellor and current editor of the London Evening Standard, spoke at The Parliamentary Review gala this week, discussing everything from Boris to Che Guevara. Osborne described the Review as a “brilliant organisation” that he was “glad to support”.

Julia Hartley-Brewer, who hosted the evening, opened proceedings by reminding the audience that Osborne was in fact the youngest chancellor in 138 years when he was appointed in 2010, before thanking him for not allowing the Evening Standard to become a “Tory mouthpiece.”

The former chancellor then entered the stage by thanking The Parliamentary Review, before opening with an amusing story about his early career in public speaking. After addressing a very small gathering of the Wales Women’s Conservative Committee, he overheard their leader lament that they would be able to get better speakers than him if they only had better attendance at meetings.

“I’m pleased to be here and support the work of this brilliant organisation,” said Osborne. “Daniel Yossman [Executive Director of The Parliamentary Review] is going to be 30 tomorrow, and it is quite an achievement to have created this incredible business that brings together so many different people from industry and education together."

“I’m pleased to be here and support the work of this brilliant organisation,” said Osborne. “Daniel Yossman [Executive Director of The Parliamentary Review] is going to be 30 tomorrow, and it is quite an achievement to have created this incredible business that brings together so many different people from industry and education together. I congratulate him and the whole team for allowing you to do that and interact and learn about what is going on in the political world.” 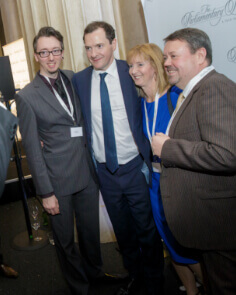 Osborne went on to discuss how his new career as a journalist differs so greatly from his old one in politics, before landing on the topic of Boris Johnson. Osborne explained how he and Johnson had been to see George W. Bush in the early 1990s while we was still the Governor of Texas. The former president then grilled Johnson on his “Russian name” and “Che Guevara watch”, which Johnson insisted he had borrowed from his wife. Osborne joked that it was unlike Boris not to “take responsibility for his actions.”

Osborne then referenced Ed Balls, who spoke earlier that evening, describing him as his “warm-up act.” Osborne and Balls used to be opponents across the dispatch box as chancellor and shadow chancellor respectively, and Osborne reflected on how funny it was that they were now working together with The Parliamentary Review.

"Things we take for granted: stability, parliamentary democracy – which The Parliamentary Review is part of – civic society and our business community, these are valuable.”

“There have been an extraordinary set of changes in British politics in recent years,” Osborne continued. “I have had conversations with people from business and education tonight and I hope to leave everyone feeling optimistic about the future. Things we take for granted: stability, parliamentary democracy – which The Parliamentary Review is part of – civic society and our business community, these are valuable.”

Osborne then talked about the importance of technology in the modern world and explained that it was a real force for good in the future. WebBoss CEO Kevin Wilson, who was in attendance at the event, discussed how they were “keen to promote women in tech” in their recent entry into the Technology edition of The Parliamentary Review.

Bamboo Technology Group also discussed the how “the advancement of technology” has “ensured that the UK has kept pace with its international counterparts”. After the gala, they said that the Review was “a fantastic opportunity to look further at who is conducting best practice in our sector of the industry.”

The Creative Engagement Group discussed the trends and opportunities within the creative and tech industries in their contribution to the Review. CEO Russ Lidstone wrote: “Our proposition is proving to be deeply compelling and relevant to blue chip clients in multiple industries including technology, media, professional services, automotive, travel and tourism, with a particular strength in healthcare.”

We use cookies for personalisation, analytics, and for other purposes. Learn more or change your cookie preferences. By interacting with this site, you agree to our use of cookies.

We can create websites for all budgets

Easy to use CMS, with training provided

All of our websites are fully secure